Langford Sutherland purchased 160 acres here from Jonathan Meeds, a small-time land speculator from New York who had patented (purchased) it from the Federal Government in 1831. Langford and his wife, Lydia, moved to Pittsfield Township in 1832 or 1833. With them were their three oldest children: Mary, age 5; Daniel, age 3; and Jane, age 2.

They came from New York State by covered wagon pulled by a yoke of two oxen. At Buffalo, NY, the wagon and oxen were loaded on the deck of a schooner, and three days later arrived in Detroit. The trip to this site took another week.

Upon arriving here, they immediately began construction of a home for their winter shelter. That home is a portion of this larger structure, and today comprises the dining room, overhead hired man's quarters and side front porch. Their fourth child, Sarah Adeline, was born in that house in 1833.

Within a few years, Langford enlarged this initial house to the east, adding what today is the kitchen and upstairs storage room. In this Early House, four more children were born; and by 1844, the parents, 8 children and a hired man were occupying that portion of this house. The Main House, with its Greek revival detailing, was constructed at some date between 1844 and the Civil War.

After arrival here, Langford acquired additional land, expanding this farm to both the east and west, and also purchased land in other sections of the township. When Daniel was married in 1858, he gave Daniel 90 acres of the original 160 acre farm, land just west of this house. Daniel lived in a small house to the west of this structure. Later in life, Daniel retired to Ypsilanti, where he was badly injured during the "cyclone" of 1893, and died from his injuries in 1895.

In 1863 Langford gave Nelson 90 acres: a portion of the farm he had added to the southeast. Nelson acquired additional land, but later moved to Ann Arbor where he became active in civic affairs. He was deputy sheriff for Washtenaw County and street commissioner for the city of Ann Arbor; and upon his untimely death in 1894 was highly praised for his conscientious service.

Upon Langford's death, he gave life estate of 10 acres that included this house, farm buildings, and orchard to his wife Lydia; and willed the balance of his land to Tobias. Tobias and his own family lived here with Lydia until their respective deaths. Tobias and his wife, Josephine Kanouse, had 2 children: Ernest and Bessie. Tobias and Josephine died in 1915.

Ernest and his wife, Delia Rheinfrank, continued to live on the farm. They had one child: Mildred, who married Arthur Wilson. Arthur and Mildred Wilson had 2 children: Ernestine and Harold; and lived next door (to the east) in the hired man's house. Since Harold was a "sickly child", Ernestine spent many days in this house with her grandparents, leaving vivid memories that have been shared with the historical society.

Harold and his wife, Mary Roy, and their only son, Neil, were the last family members to live in this house. Neil died in 2000, leaving no heirs.

Six generations of the Sutherland-Wilson family lived in this house and farmstead until it was acquired by Pittsfield Charter Township to be preserved as a historic farm museum. 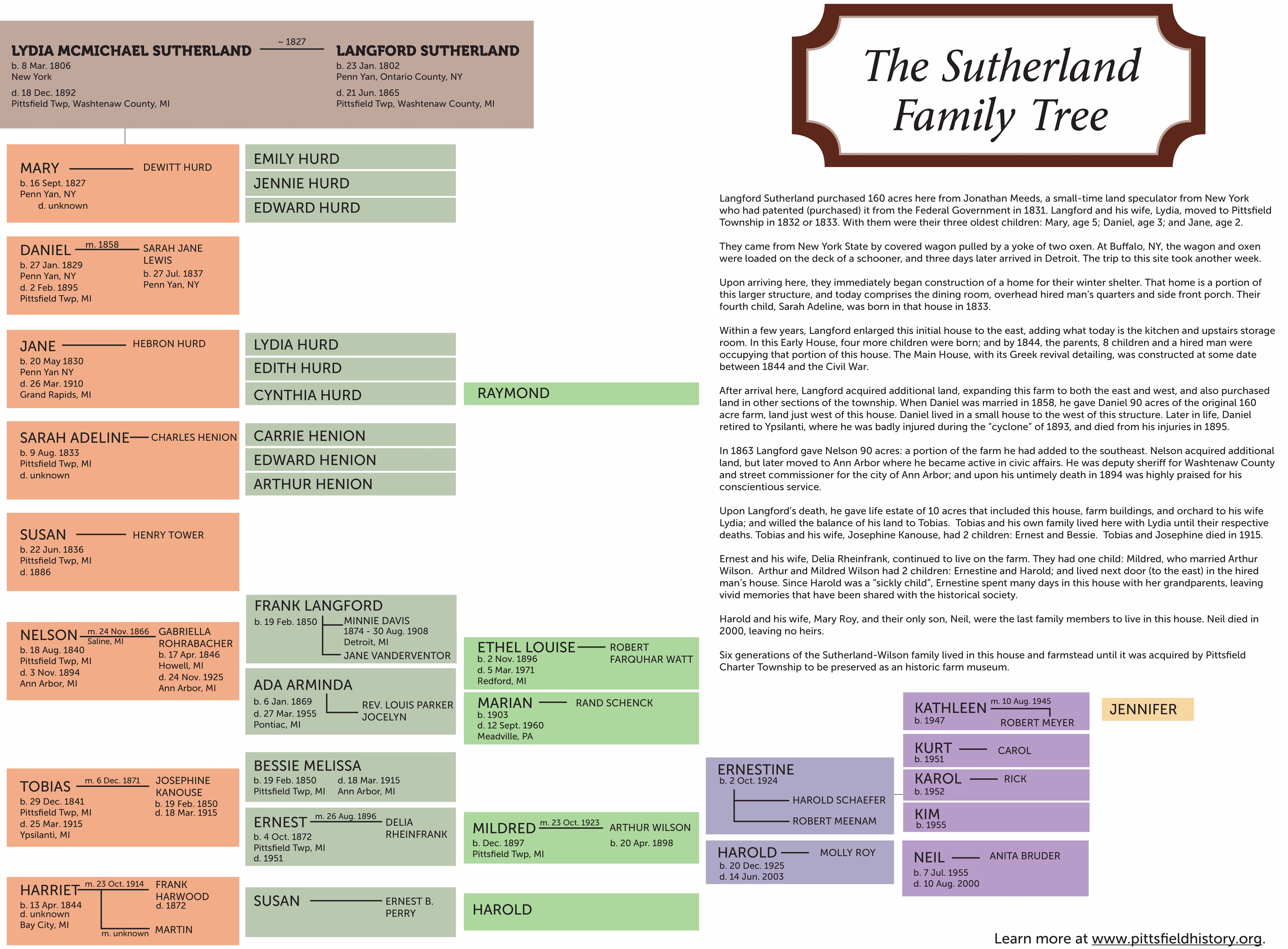